I’m a huge fan of Adafruit’s projects, especially the Feather series of microcontrollers and associated FeatherWings (add-on boards). The format is so popular that Particle (another one of my favorite hardware companies) even adopted the footprint for their latest hardware.

Lately, I’ve been working on a refresh of a Word Clock project I found in Make Magazine a long time ago. I’ve rebuilt the project for the Feather Huzzah32 board (the original project used the Adafruit Trinket board) and I’m also making a wall mounted version of the project as well.

One of the things I want to do with the wall-mounted version is mount a little ePaper display on the side of the clock so I check the device’s network connection and the last time it retrieved the current date/time from the Internet. To do this, I added the Adafruit 2.13” Monochrome eInk / ePaper Display FeatherWing - 250x122 Monochrome with SSD1680 and I poked and prodded through the documentation to try to figure out how to use it.

My first few attempts failed miserably. According to the ePaper Display FeatherWing Documentation: “This ‘Wing is tested to work with all of our Feathers.” OK, that is reassuring, but I wanted details.

Next, I dug through all of the relevant documentation for their ePaper displays and according to their Adafruit eInk Display Breakouts and FeatherWings documentation: “If you’re using a FeatherWing, try File → Examples → Adafruit_EPD → FeatherWingTest” (as shown in the following figure). 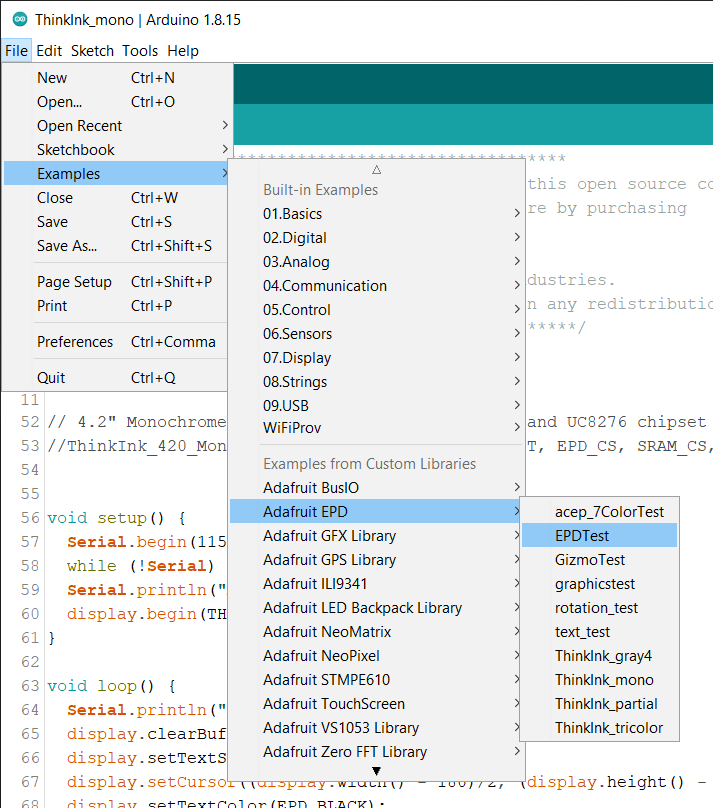 Unfortunately, the configuration of the sample sketch varies depending on what hardware device you’re using (sigh). I poked and prodded at the documentation again trying to figure out how to configure the sketch and failed miserably.

Finally after creating two separate Adafruit Forum tickets (#1 and #2)and sending an email to the support email address, I finally got an answer.

Since the display is a monochrome display, you have to use the ThinkInk_mono sketch instead of EPDtest, and the sketch’s configuration looks like this: